Catherine Alexander was born on November 3, 1923, in Upper Marlboro, MD, to Joseph and Maddie Ireland. Joseph worked in tobacco and built two houses during his life. The first house is the one that Catherine was born in and the second house was for his and Maddie’s retirement, which he built when he was in his 70’s. Catherine was one of eight children – four boys and four girls, one of which was a nun for 67 years. One of her sisters is still living in Florida and they talk every day, mostly about the old times.

Catherine attended Merrywood High School and her first job was as a store clerk in a small department store. She met her husband, Robert Joseph Alexander, at the Camp Springs Air Force Base in Maryland. Robert was in the Air Force and Catherine’s sister-in-law worked at the base. Catherine attended a USO dance, met Robert, and the rest is history. On New Year’s Day, 1945, Robert called Catherine while she was at work and said, “Let’s get married.” Catherine said yes, and they were married three days later. They moved to Philadelphia, Robert’s home town, in July 1945. Robert worked for the Marine Corp at Broad and Washington while Catherine had her hands full with their nine children. They had seven girls and two boys. Catherine loves spending time with her family and is always happy to show off pictures of them.

The happy couple were married for 67 years until Robert’s unfortunate passing on February 1, 2012. Before he left, Robert wrote four letters to Catherine that were given to her after he was gone. He thanked her for all she had done for him and their children, how well she had taken care of their family, and how she completed his life.

We are now graced with her presence here at Columbia Cottage. Her smile and warmth are contagious, and her kind humor can brighten a room. She is very grateful to the Cottage staff and we look forward to the new memories we can make with her! 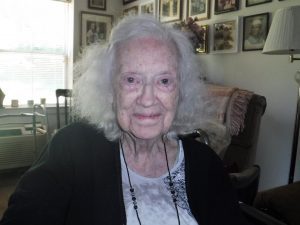