Hello, my name is Noreen Krymski, MSW, MHP. I am 45 years old and originally from Pittsburgh, PA. I have one older sister and a younger brother. I graduated high school in 1992 from Hampton High School, I enlisted in the Navy right after high school, I was an Aircrew Survival Equipmentman (I was responsible for all lifesaving gear for aircrafts and aircrew) My time in the Navy sent me to lots of places including, two different islands in Japan, Italy, Germany, London and I was deployed to Uganda, Africa in 1997, all while being stationed in Hawaii. I served 6 years and after I separated from the Navy, I moved to Whidbey Island, WA (state) where I worked as a camera sales person for a few years. I then began my journey working for one of the many Northwest Indian tribal casinos where I was a table games shift manager for 15years. During that time, I was blessed with the opportunity to complete my degree’s, my Associates in Human Services with a specialty in Chemical Dependency I continued my education with Trinity Western University and obtained my bachelor’s degree in psychology, and finally completed my master’s degree from the University of Southern California. I graduated with my master’s in social work, obtaining both my MSW and MHP with specialties in Mental Health and Military and Families. I am the new Administrative Assistant and the Activities Director. In my spare time I am an Ambassador for a non-profit organization called Mission22, which works to reduce the rate of Veteran suicide and I also love my fur babies my 9-year-old Pomeranian and my 7-year-old cat PIA. I look forward to getting to know each of you! 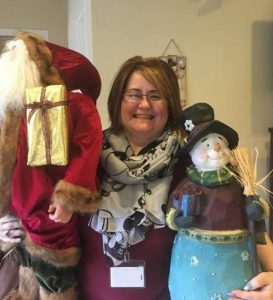