Natalie Shovlin never tells her age but mostly identifies herself as a retired Navy wife. Natalie was a Dental Assistant until she met her husband Daniel, which she met at a dance that her friends talked her into going to. It was love at first sight. In fact, he told her that first day that he was going to marry her! She spent 27 years by her husband’s side in the military, although he was out to sea nine months out of the year. She smiles when she says she followed him with kids in tow, moving every two years throughout the country. They were married 50 years before he passed away 20 years ago.

She has spent the last 20 years seeing her family grow. Her one son is an engineer in New Jersey with a wife and two of her grandchildren, a girl in high school and boy in his first year of college. She also has a son in Germany who is a web designer and has lived there for over 20 years. Her daughter, who lives in Hershey, is a retired corporate communicator and interior designer. She raised Natalie’s first granddaughter who is named after her grandmother and is in her second year of medical school in Chicago, studying to be a doctor. She’s undecided as to what type of doctor.

Natalie’s life has always revolved around her family. She loves to face-time with her grandchildren when her daughter comes to visit.

Natalie’s hobbies are going out to lunch, watching Wheel of Fortune and golf. She is a devout Catholic and is looking forward to a trip to visit St. Joan of Arc Church where she was a parishioner for over 45 years.

She really likes the staff here. “Everyone, here at Columbia Cottage has been so nice to me. Thank you, so much!” 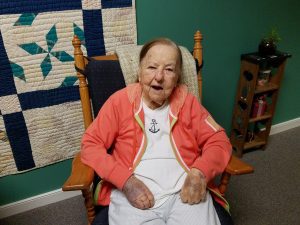